How It All Began

The club was founded in 1899 after several local businessmen got together and decided to form a golf club in Ormskirk. After considering several suitable sites, a section of Lathom Park was considered to be perfect. Having been originally part of a Royal Deer Park, it had never been under the plough, the top soil was sandy with little or no clay and there was an abundance of excellent turf.

The course has changed a great deal over the years, with at least two major reconstructions since Harold Hilton transformed it into a full eighteen holes in 1903.

A crescent shaped hollow near the brook on the left of the 16th hole is reputed to have been an emplacement for a battery of Cromwell's forces which attacked Lathom House in 1644.

During the 1st world war, as part of the war effort, cattle were grazed on the course and a small area turned over to growing vegetables !

In 1940, before returning to Germany, the Luftwaffe discharged their remaining bombs on the course after a bombing raid on Liverpool!

History of some of our Trophies 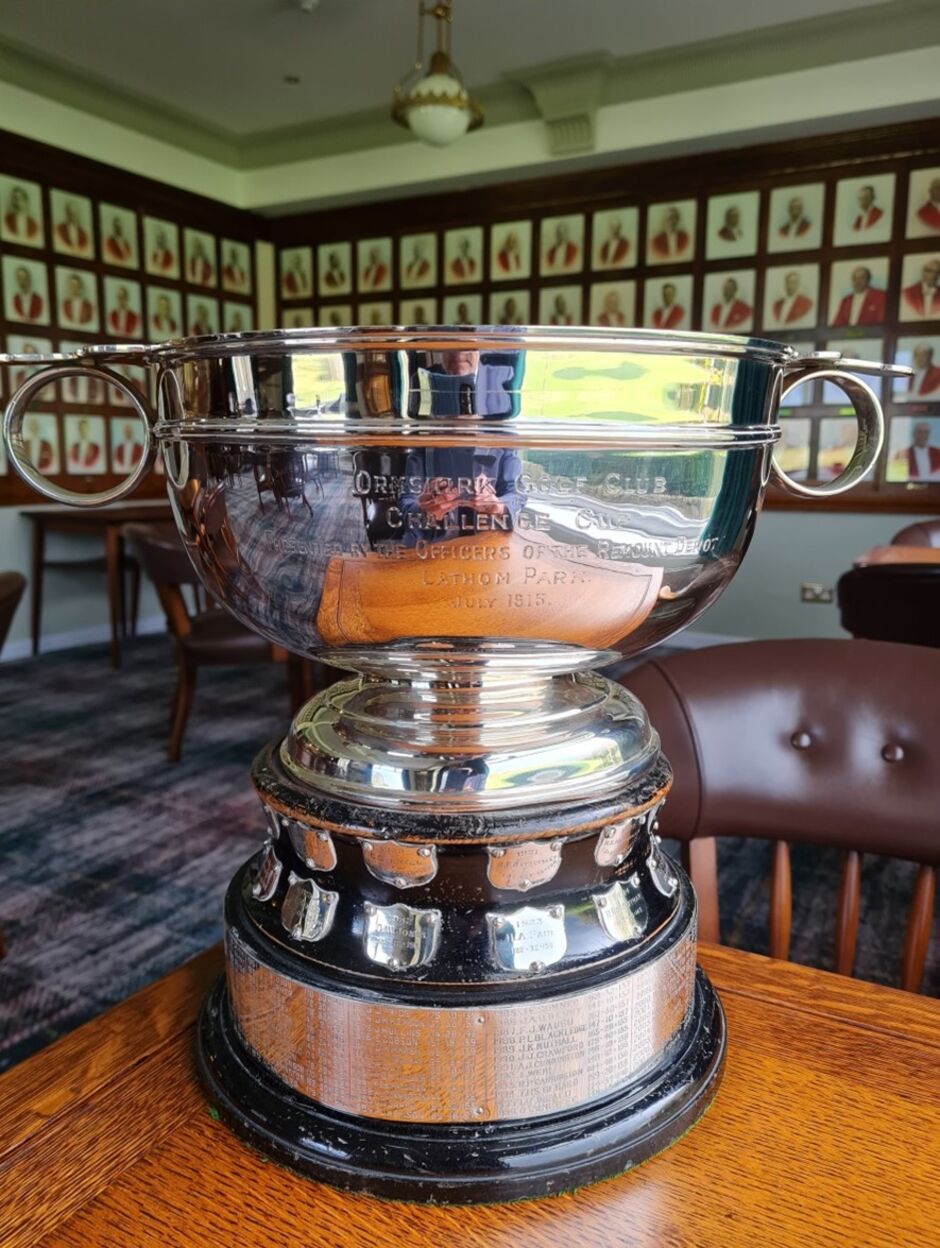 “The Ormskirk Golf Club promises to soon recover its pre-war glory and already the Council have been making great improvements on the [links]. Thanks to labour being more plentiful, the whole course has received much-needed attention, particularly the bunkers, and the Club has every prospect of attaining to that popularity which it was on the high way to securing before the war broke out. The competitions are to be resumed as usual and these will open with one commencing on Good Friday and continued on Saturday and Easter Monday for a beautiful silver challenge cup presented by the Officers of the Remount Depot, Lathom Park, who have enjoyed the hospitality of the Club whilst engaged on military service”. 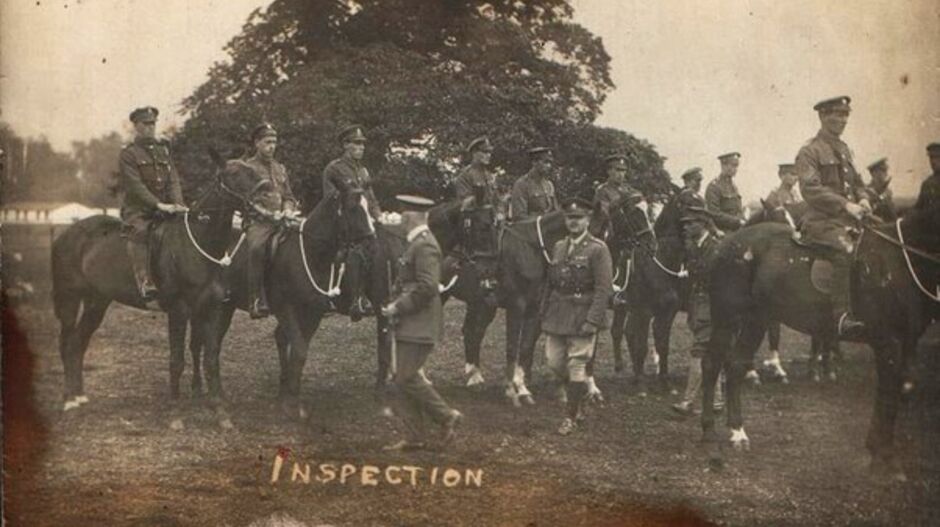 In WW1 the Army needed large numbers of horses and mules for moving equipment, stores and munitions etc, over rough battlefield ground which could not be accessed by mechanical vehicles and also for  mounted Cavalry actions. From an initial regular-stock of 25,000 it grew to 165,000 by the time of war mobilisation and eventually, by 1917 a stock of 460,000 were at work in Full-Service. Lathom Park owned by the 3rd Earl of Lathom, Edward Bootle Wilbraham (via Trustees) put the grounds of the Park at the disposal of the Government as its close proximity to the Port of Liverpool made it a premier location for the receipt of imported equines from Canada and North America to become trained and conditioned for War Duties. The Remount Depot came to be known locally as “The Tin City” and needed to accommodate some 2100 residents – saddlers, harness makers, farriers, wheelwrights, grooms and specialists whose job was to “break-in” new young horses. By 1919 there were 6688 men.

All buildings established on site – barracks, sheds, stables, smithies and tack-rooms were of a temporary nature and construction began in September 1914, being dismantled and sold off  by March 1920 and interestingly - any stock of remainder/ returned horses were sold off by auction at Park Road, Ormskirk - 4390 apparently with average values of £39 and at best £107.

It was on the 22nd October 1914 that the first batch of 1600 Canadian horses arrived into Ormskirk destined to be walked from the Rail terminus, up Greetby Hill, down Dark lane, onto Lathom Lane leading up beside the golf course boundary wall on Cranes Lane and ending the walk at the Lathom Park estate grounds by crossing over Hall Lane. Police arrangements enabled a very successful route-way and 2 Founder Members of the Golf Club – R.R. Glover and C.F. Ellis were Assistant Special Voluntary Constables on the day. 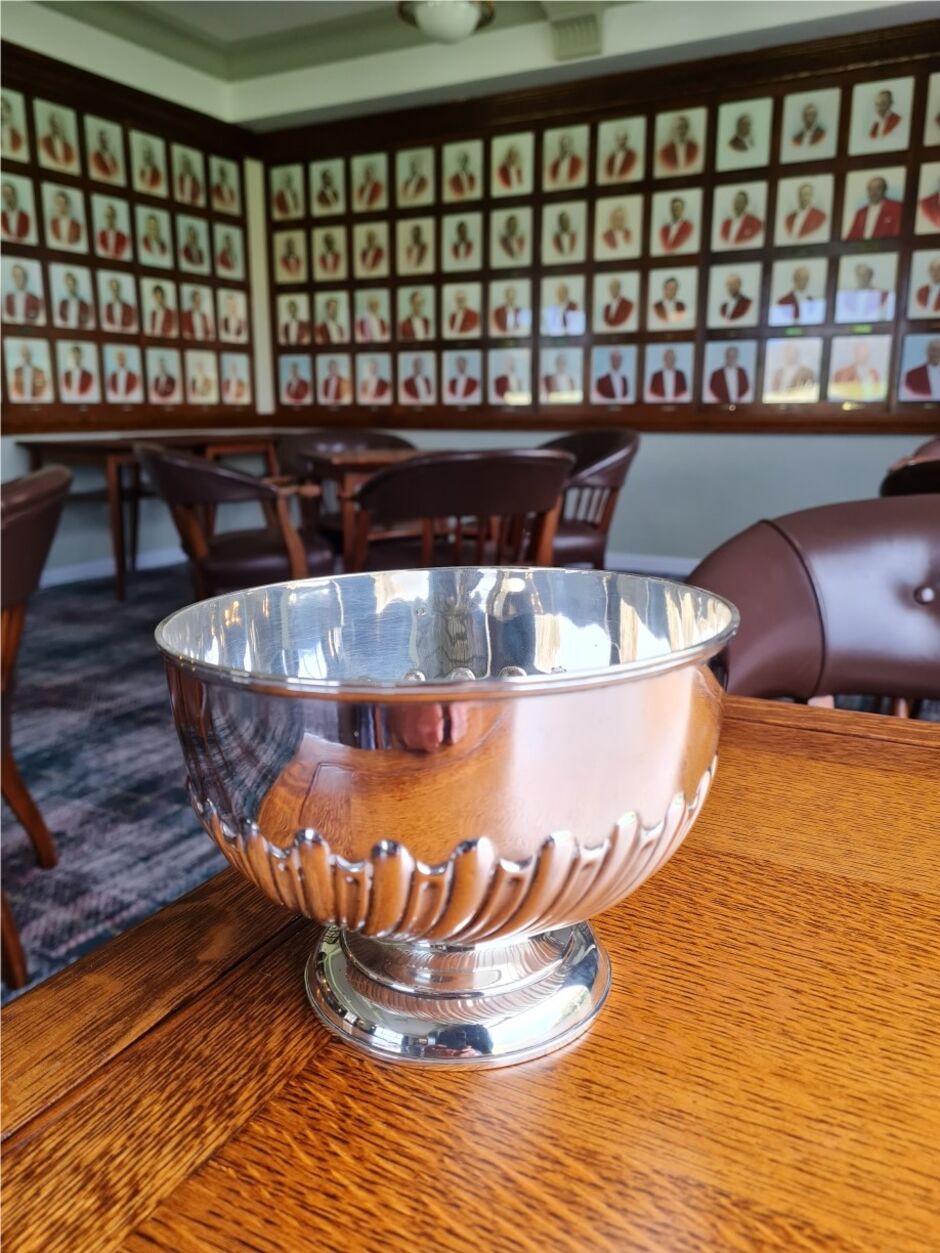 The bright Silver Cup presented to the Golf Club by the Officers of the RAOC depot circa 1949.

Presented to the Club in return for the hospitality offered at the Club. - Upon very close inspection there are the remnants of an inscription that the Cup was presented as a prize at another Golf Course in 1901.

Due to substantial reductions made in our armed forces after WW2 across the UK the structure of regional depots, ordnance support units, training materiel parks, supply depots and ammunition sub depots was steadily run down and the Burscough depot itself was closed in the mid 1970`s. It was situated on land between the south-west bank of the Leeds-Liverpool canal and to the south-east of the Main Ormskirk to Preston Railway. The Burscough Heathfields housing development now occupies all of the same landscape. 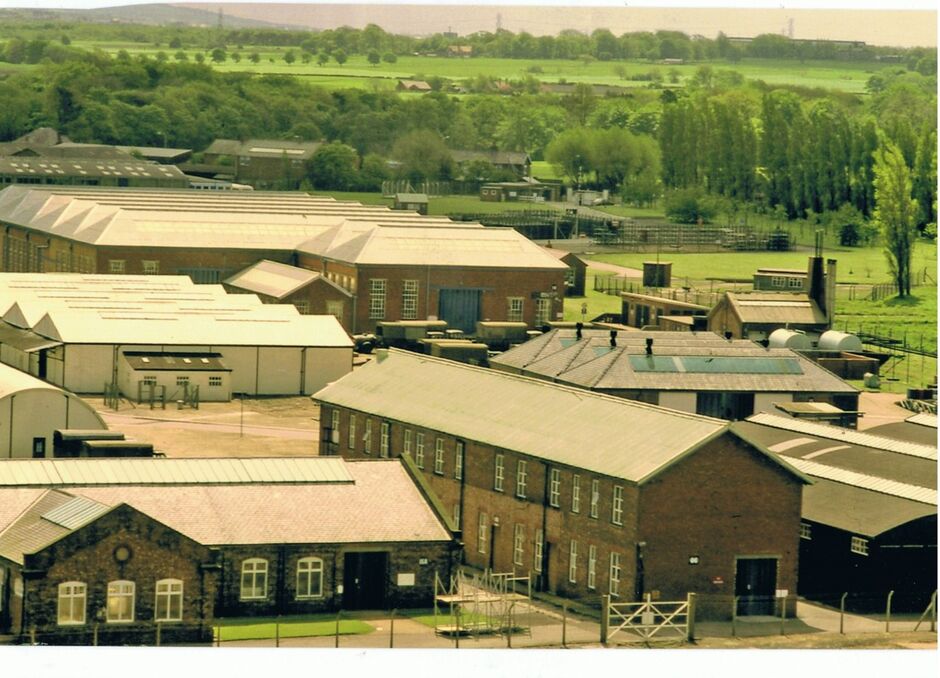 The RAOC became a Corps of the British Army, and was in fact an organisation much older than the  “Army” the Tudors began the Board of Ordnance (which lasted until 1855) prior to there ever being a Secretary of State for War or any Commander-in-Chief  – in charge of Army logistics, supply and repair for example. Until 1942 the RAOC was both a supply and repair organisation. With regards to supply – Burscough had responsibility for weapons, rifles, machine guns, armoured vehicles and other military equipment, ammunition, clothing, laundry, mobile sanitary kit and even photography. In 1964 the McCleod Reorganisation of Army logistics resulted in the RAOC taking over vehicular fuel, food rations and accommodation stores functions as well as the Army Fire Service functions. Eventually, in 1993, the RAOC was amalgamated into the existing Royal Logistics Corps (RLC).

The Tanjore Shield (as displayed in the Spike Bar) 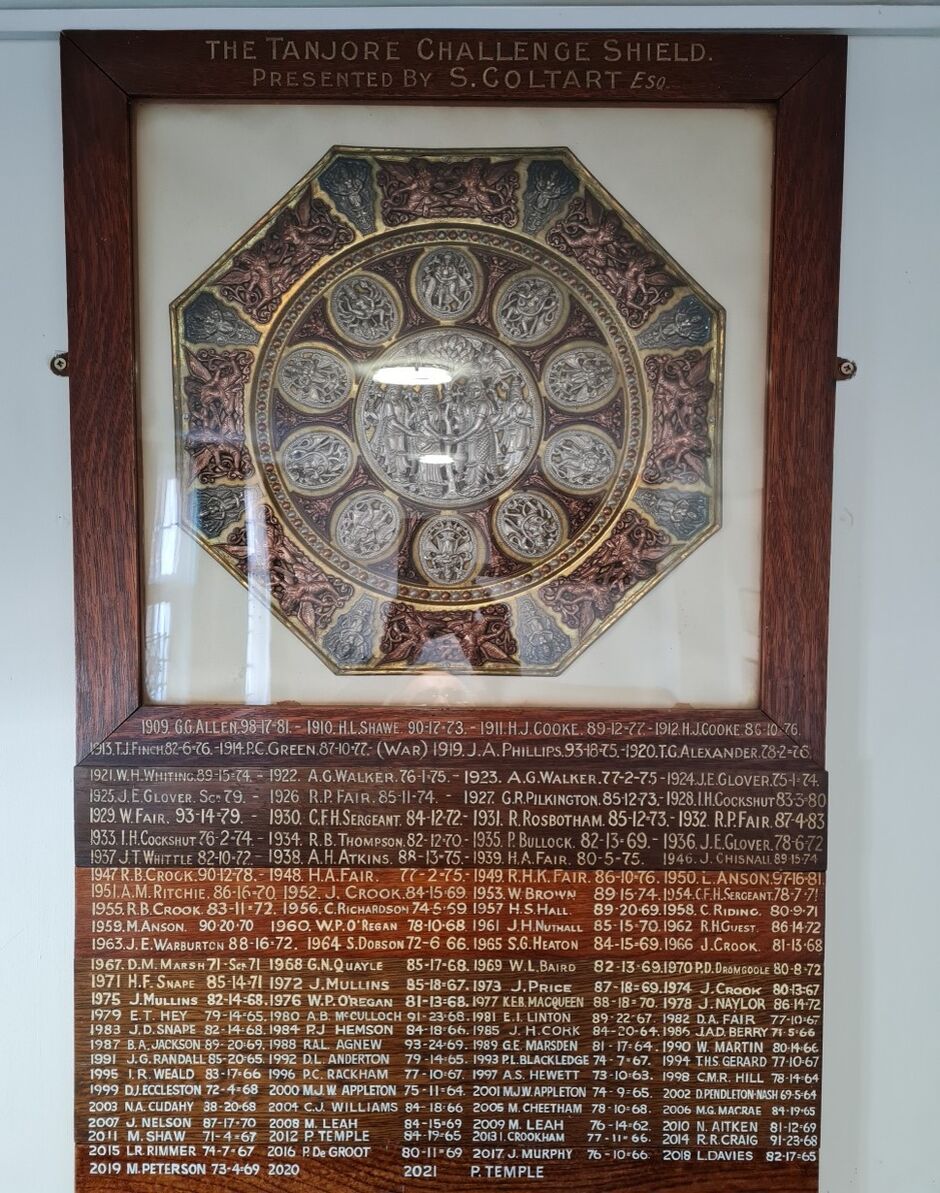 The Tanjore (Thanjauur) Shield is mounted high upon the north-east wall of the Spike Bar at the Golf Club. It is a fascinating object, delicately hand-worked by craft-skilled metal workers of the Tamil Nadu Indian state. Tanjore is a city within the region of Madras – the cultural capital of the Gupta Empire and an important centre of South Indian Art and Architecture, for example the constructed  Chola-Temples there - are of distinctive architectural specification – Chola was an empire ruled by successive kings circa 1000AD.

The creation of the Tanjore precious metal plate is accredited to Raja Serfoji (1797-1832) who was the Maratha ruler of Tanjore. The plates are designed to be display objects, decorative, to be hung on walls in order to transmit a well-wishing future of wealth and happiness. The plate is iconic and traditional in its 3-d portraiture of Indian Deities – who all belong to the Hindu scripture and belief system. The Central figures are the most important Gods and Goddesses – such as Bal Krishna, Lord Rama and Ganesha for example and these are sculpted and worked in solid Silver. On the exterior outer circumferences are figures of saints from the hindu mythologies who are all as beautifully portrayed and stylised in their characteristic allegorical poses. The metal used for them is copper and brass. The Iconography of the plates do vary from craft house to craft house however the Ormskirk Golf Club example is incredibly well-detailed and instructive to a high degree. 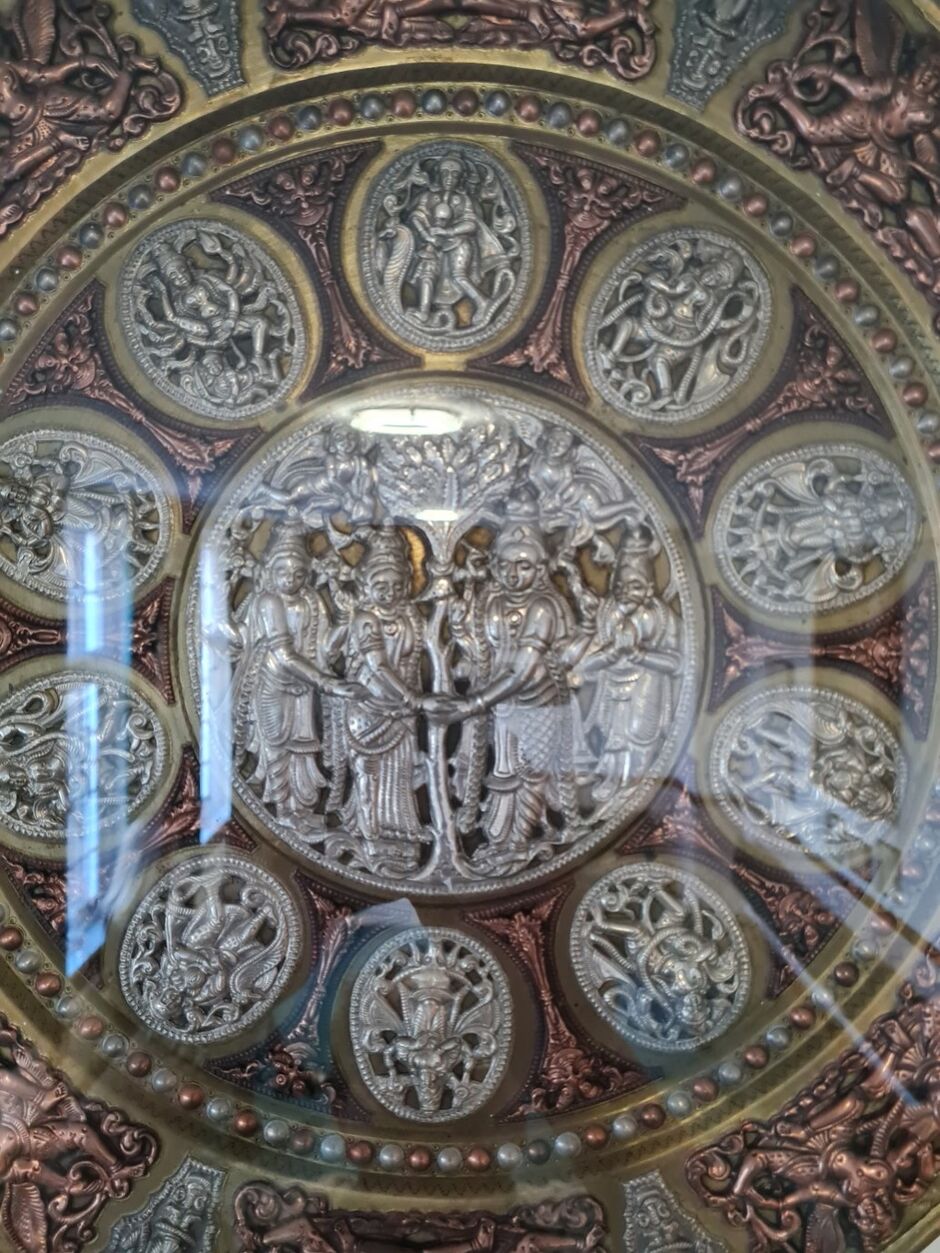 It would be sheer speculation to wonder what the occupation of the Gentleman who donated the Tanjore plate was, the late Mr S Coltart (1909). Sadly there are no living- memories, nor written records of the handover of the “trophy” to the Golf Club.  Speculations could include…that he or a relative of his was a member of the British Indian Army the “Madras Army” or that his or/ and familial professional business was trade within India whereby this beautiful object could have been procured and brought back to England. We shall all have to appreciate the mystery…

For some background to our Centenary Trophy please click the link below.

For some background to the  trophy named after the Cottage Hospital played for with the RAF Benevolent Bowl and presented by RE Hattersley click the link below.

The beautifully ornate Trophy “R.A.F. Benevolent Bowl” awarded for the Ormskirk Golf Club competition winning round “against bogey” whereupon all the competition Entrance Fees paid in by the club`s competing members are transferred to this wonderful charitable cause– please click the link below.

Upon the declaration of war with Germany in September 1939 the all-Female, Teacher-Training College on St Helens Road, Ormskirk - “The Edge Hill College” was immediately requisitioned by the Government for use by Royal Army Medical Corps. The building became the RAMC 19th General Military Hospital-– please click the link below.

The Hattersley Trophy our 36 hole scratch trophy -some backgound to Mr. R.E Hattersley  please click the link below.

Historical Information about the donors of the Wignall and Woods Trophies please click the link below.

Background to C.W.H.Clark- the donor of the Clark Challenge Trophy 36 hole Net normally played in September -please click the link below.

Background to J.E Potter whose wife donated the Potter Silver Cigar Box for the best gross score played  alongside the Wignall Challenge Cup  -please click the link below.

Background to Captain J.R. Prescott- the donor of the Prescott Cup-the last event of the season and the medals final-please click the link below.

Background to the Ivy Trophy-Awarded to the winners of the best of 6 net scores in key competitions.

A special thanks to Gary Mitchell for the historical information collated by him for this page. 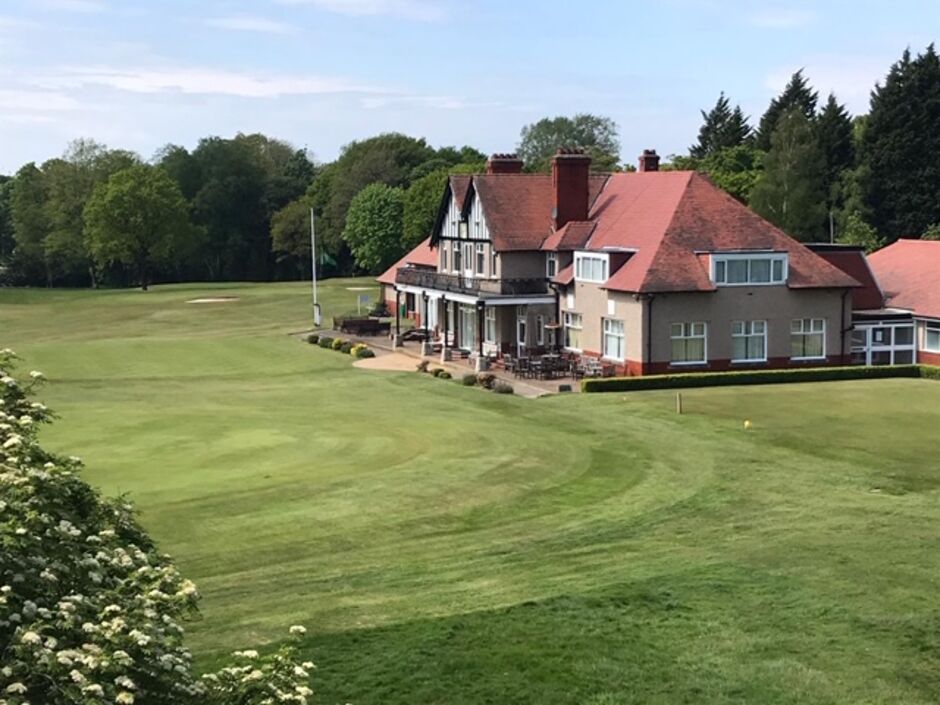